A modestly sized kitchen can represent a serious headache for homeowners. Not only does it leave less elbow room for chopping and less surface space for ingredients, but it can also mean that too many cooks spoil more than just the broth! An overcrowded kitchen can lead to simmering tensions and stressed-out chefs.

Of course, expanding the environment is an option that’s simply unavailable to most people, so the next best course of action is to maximise the dimensions at your disposal. This can be achieved through cunning paintwork and smart design. By carefully considering which materials and tones you use to decorate the space, you can trick the eye into thinking it’s bigger than it really is.

If that sounds like an effect you wish to replicate in your small kitchen, it’s worth trying out these colours in your home. Depending upon your personal preference, one style or selection may work better than others, but try to envisage your kitchen with a new makeover and settle on the colours that are best for you.

A paler shade of white

It might be the oldest trick in the book, but there’s a reason why painting a surface white has such a reputation for making small spaces look bigger. The brightness of white paint reflects light and creates an airer, more expansive atmosphere in a room, which is key to bringing out its best qualities. Of course, there are many different shades of white and there’s absolutely no reason for you to limit yourself to just one of them.

Sticking with the theme of using light colours to maximise length and emphasise space, pastel tones work just as well as white in this respect. Pale blues and green are reminiscent of the sky and the sea, so painting your kitchen in those colours will subconsciously transport you to a more expansive location. Other pastel hues like pink and purple can also work well, though they invariably make for more of a statement aesthetic.

It’s no secret that grey is the new darling of the interior design world. Compatible with almost any other colour, grey is versatile enough that it allows flexibility and freedom in the overall impression you wish to create. It’s also especially effective in smaller spaces, such as those in the confines of a slightly cramped kitchen.

As alluded to above, bright colours are generally not advisable for small kitchens, since they can make the room feel overwhelming and oppressive. However, if you add them into the mix in small doses, they can manipulate your mind and distract from the compact nature of the room. For example, painting the upper part of your walls in a bold colour like the yellow pictured above invites the eye to drift upwards, suggesting that the ceilings are higher than they are.

Uniformity can be expansive

Generally speaking, designers recommend that you choose a separate colour for your walls and cabinets, since this creates a pleasing contrast for the eye. However, there is a case to be made for selecting a uniform shade (with perhaps minor variations) in a smaller space to expand its limits. That’s because a kitchen which has been painted in just a single colour will blend into one, so the eye isn’t drawn to one focal point or feature in particular.

On the other hand, there’s also the option to go the other way entirely and select one wall to become a centrepiece for the entire room. It’s an especially effective tactic in galley kitchens which are long and narrow; in this situation, it’s always advisable to paint the smallest wall in the boldest colour. That technique will attract attention to the wall and accentuate it, all the while encouraging the other walls to recede and making the entire space squarer in appearance.

Be bold with your backsplashes

Breathing new life into a tired kitchen doesn’t have to encompass a full remodel. Instead, you can focus on just one or two elements and give them a new lease of life, with knock-on effects noticeable on the rest of the room as a result.  Backsplashes are a godsend in this respect. By selecting contrasting colours in the tiling of your backsplash, you can command immediate attention from all who enter your kitchen and create an environment that’s chic and stylish in a single stroke.

Natural materials like timber, stone and marble can work wonders in transforming a smaller kitchen. Wooden floorboards with a pronounced grain can fool the mind into thinking that the lines extend longer than they do, so that vertical grains suggest height and horizontal ones width. What’s more, these natural materials also add a touch of class and panache that’s missing from homes where Formica and plastic rule the roost.

There’s something about the mixture of chrome and copper that instantly captures the imagination. Both elements bring a confident modernity of their own into any display they inhabit, but when combined, their qualities take on even more powerful impact. Adding a third colour into the mix, such as the dark green tiling in the picture above, generates even further intrigue without overwhelming the eye due to the cleanliness and clarity of the shades at play.

As the largest surface in most kitchens, the floor represents an often-neglected opportunity for creating an impressive aesthetic. There’s merit in pushing the boat out when it comes to painting your floor, as the pictured zigzag design communicates. Of course, that type of audacity might be a bridge too far for many homeowners, but more orthodox herringbone or chequered patterns can also serve your purpose equally well.

We’ve already covered the merits of selecting whites and greys in a small kitchen space, but both colours can be complemented even further by combining them with splashes of black. The high contrast contained in the pairing will result in a striking colour scheme that immediately adds some individual charm to any kitchen. What’s more, the addition of a third tone of any colour can brighten up proceedings even further.

Green is a colour that is inextricably linked with the Great Outdoors in our minds… and what’s more expansive than Mother Nature’s playground? Harness that energy by introducing green into your kitchen in the shade that suits you best. The eye-catching lime colours featured above might be too loud for some tastes, but mint, turquoise or similarly quieter tones can all bring out the best in your kitchen’s features.

Red is famously the colour of revolution, so why not revolutionise the appearance of your kitchen with a scarlet colour scheme? When partnered with whites and greys, you can achieve a retro effect that recalls the cool and crisp aesthetic of an American diner, while red and black generates more drama. If both of those scenarios sound a little too adventurous for you, you can always tone down its impact by introducing red in smaller doses, such as through appliances or bar stools.

As a rule of thumb, warm colours like yellow, orange and red are avoided in smaller spaces, since they can create an atmosphere that’s cosy to some and claustrophobic to others. However, when applied appropriately, they can bring out the natural charm of a kitchen’s dimensions. If your tastes lean towards quirkiness and whimsy, painting your kitchen a warm tone can communicate your personality much better than softer hues could ever hope to.

Achieving feng shui in your home often involves creating a seamless correlation from one room to the next. This is all the more important when it comes to maximising the space in a small kitchen, since carrying on its colour scheme into the adjoining areas of the house will suggest that the rooms merge into one another. The technique is especially effective when employed in open-plan kitchens, but can also be useful for separate rooms, too.

Using mirrored surfaces to create the illusion of space is another classic trick when it comes to maximising dimensions. While you can incorporate mirrors into walls and cabinets, glossy paints and ceramic panels often work just as well, without upsetting the surrounding décor in your kitchen. It’s all about reflecting light and suggesting that there’s more space to play with than there is in reality.

Other tips on making your small kitchen look bigger

Besides the paintwork, there are several other techniques you can use to amplify your kitchen’s environs and turn a dark and dingy room into a sunny and airy one.

For starters, it should be clear by now that light is the key to unlocking the potential of any room. Maximising the inflow of natural light into a kitchen can cheer up the space no end, so skylights, windows and doors should all be used to optimum effect. Blinds can serve their purpose at night-time, but should be rolled away in the day.

You can also take advantage of the wall surface by floating shelves instead of installing cabinets. Not only will these not project out into the room, thus occupying less space, but they also contribute to a streamlined and contemporary aesthetic. Wall racks are another method of utilising what could otherwise become dead space, while simultaneously creating a rustic feel.

Last but certainly not least, keep your kitchen space clean, tidy and uncluttered. Allowing items and appliances to accrue on worktops creates a messy impression that only saps your limited space further. Out of sight is out of mind! 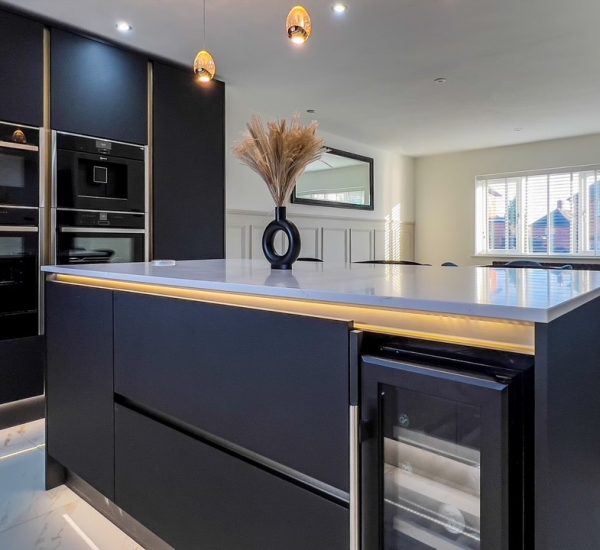 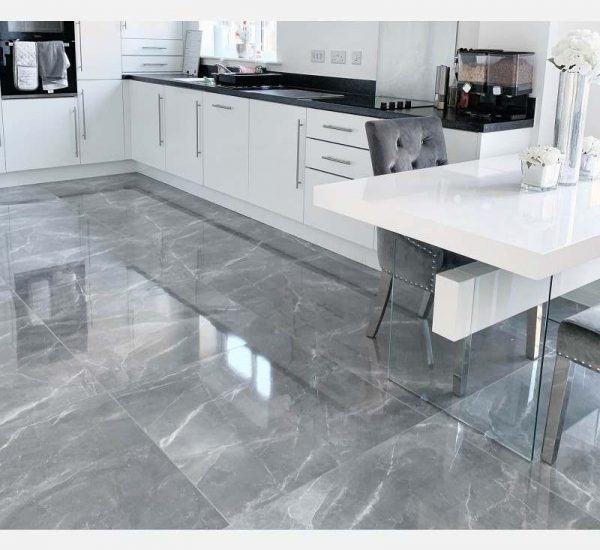 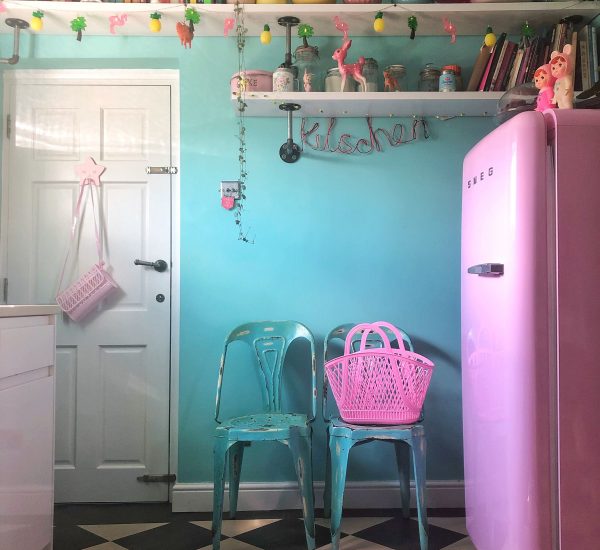